A Day For Avery (Quite the Ending To an Amazing Game!)

Please continue to share Avery's story by updating your social networks, e-mailing all of your contacts, and talking to your friends/co-workers.   The more people who are aware of SMA, the less likely future children will be affected by SMA, and the more likely there will be a cure for Avery's friends who already have SMA! 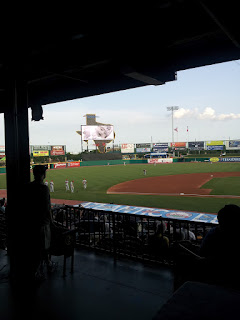 Last night the Sugar Land Skeeters went all out in honoring Avery with “A Day for Avery”.  They had a heart wrenching video montage of Avery they showed before the game, videos about SMA & Avery's story in between innings, a balloon release for Avery, t-shirts & wristbands for sale, and they wore special Avery game day jerseys (see below), which they auctioned off during the game.  So far they've raised over $14,000 with all proceeds being donated to Sophia's Cure. 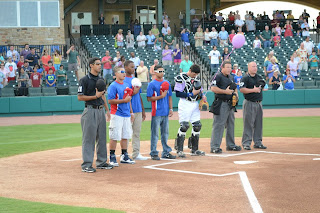 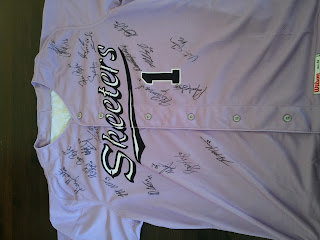 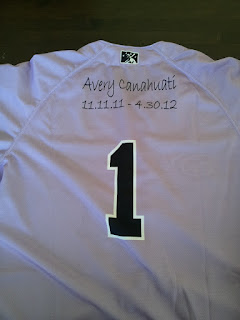 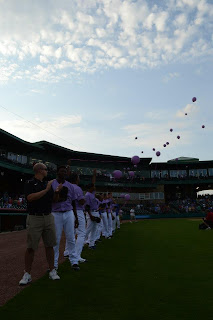 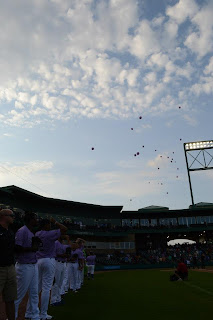 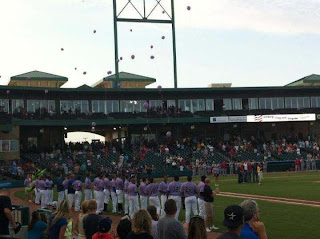 Lastly, thank you to the Sugar Land Skeeters for everything and for all of the memories from Avery's first pitch and from last night.  We appreciate everyone who attended the game last night in honor of Avery and in support of SMA Awareness and funding for a cure.  Among the people in attendance last night, were many of Avery's SMAn's and family members, along with Nancy Burford (Avery's speech pathologist), Dr. Paul Minifee (Avery's glam-tube surgeon), Dr. Nancy Glass (Avery's anesthesiologist), and last but certainly not least, Savannah, one of Avery's friends came with her mommy & family.


Oh and in case you're wondering about the outcome of the game,  the Skeeters won 4-3 in the 11th inning when the opposing pitcher uncorked a wild pitch while trying to intentionally walk the Skeeters' Ofilio Castro who happens to wear number 11.  Considering Avery's birth date was 11/11/11, this brought chills and smiles to us all at the same time. 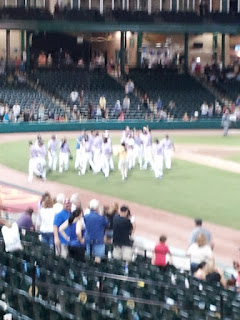 
brAVERY 5k Run (can't make it to the event, do the virtual run!)

Don't forget to share Avery's story by following & forwarding her blog, following her on
Twitter  (AveryBucketList) and Like her on Facebook (Averys Bucket List)!  The more people who are aware of SMA, the less likely future children will be affected by SMA, and the more likely there will be a cure for Avery's friends who already have SMA!

If there's anything you'd like to mail, you can send it to: